Continuing through the car, one of the major areas for updating and modernization is the suspension. The goal was to completely replace and update everything I possibly could to handle not only the new power levels, but also the loads that autocross and track duty will bring to the car. The updates also allow for a wide array of adjustment both front and rear. Originally from 1972 the car featured little to no adjustment that would really allow for any type of major performance driving. The new setup adds camber, caster, toe, height, rebound, and dampening adjustment to all 4 corners. (No caster in the rear, obviously)

In order to achieve all of this a fair amount of work was needed. It started with a set of brand new Ermish Racing Type 2 coilovers with Swift springs. The units are extremely well assembled and feature top quality parts and attention to detail. 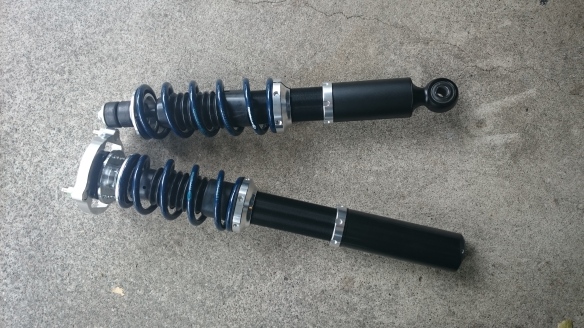 The front coilovers where then mated to a set of new 280z spindles with new ball joints and bump steer spacers. The hubs where also rebuilt with new bearings and ARP extended studs. The coils and spindles were then connected to a set of billet aluminum lower control arms. In order to get everything connected and setup properly a set of Techno Toy Tuning torsion bars and lateral links were added as well.

For the rears, the original crossmember was re-worked to allow for camber and toe adjustment by adding adjustable mounting brackets. The control arm bushings were also replaced with new urethane units from Energy Suspension. 44 years of wonderful age on the car brought with it a set of bushing that would not come out. The odd shape of the control arms also meant that pressing them out was not an option. So an entire Saturday was spent burning out the old rubber bushings then grinding out the metal sleeves. Once that was all done the new bushings were inserted and the control arms mounted to the car.

Along with all of the bushing work the rear hubs were also repacked with new bearings and grease and ARP extended studs were used to replace the old short Datsun units.